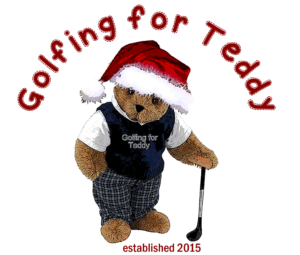 Golfing for Teddy was established in 2015 after Heinrich and Megan decided instead of buying Christmas gifts for everyone they would like to bring joy to kids in hospitals over Christmas instead.

They gave out 150 Teddy Bears Christmas 2015 and ENuus heard about what they wanted to do and did a story about it. After that the entire golf community got involved and they host an annual golf day in December to collect enough bears for every Christmas. In 2017 they collected 1000 teddy bears that was distributed to hospitals in Gautang and also Kwazulu-Natal.

In 2017 Golfing for Teddy hosted the 3rd Annual Golf Tournament at Serengeti Estates on 4 December. It was the Celebs VS Plebs edition where more than 60 high profile celebrities attended the golf day and played in it.

In 2018 they will host the 4th Annual Golfing for Teddy Tournament on 4 December at Serengeti Estates again. This golf day will be an invite only event.

They also intend to attempt a Guinness World Record to raise more awareness about this project.

For more information you can email info@playit4ward.co.za